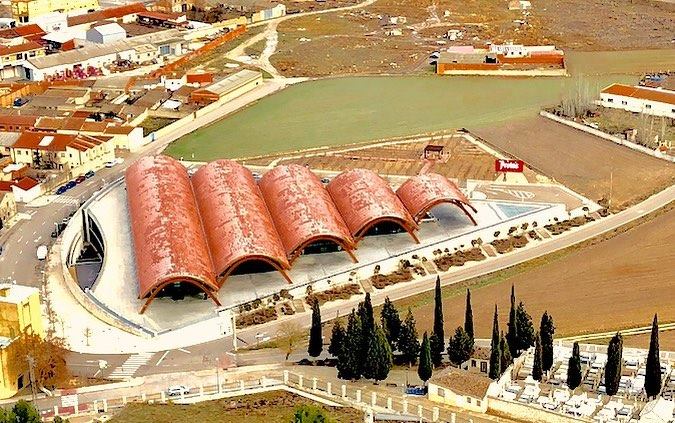 Winery architecture. A tool for making a wine brand strong and international.

View of the roof of Bodegas Protos from Penafiel castle.

It represents a bunch of grapes. Is the architecture important to make a stronger image of a wine brand? It is one of the ways to transmit that message.

This winery was designed by the architect Richard Rogers-Alonso Balaguer. The Ribera del Duero is not only wine but much more.

Maybe Marqués de Riscal was not the first winery in Spain that opted to hire famous and important architects to design a winery, but that is how I imagine it happened.  I apologize to those who know the true story, but this one that I tell I like it, and that way I tell it.

The Guggenheim Museum has been in Bilbao for a lot of years. This museum is the most important attraction when you visit Bilbao. Thousands of visitors are visiting this museum every year. It is a must-do if you go to Bilbao.

The success of the Bilbao Museum comes as a result of the previous success of the original in New York. But the design of such an attractive structure has done a lot for the fame and prestige of Bilbao.

The answer was yes. I will do it.

The Marqués de Riscal Winery is impressive. It has a good taste of combining an ultramodern design with a super-old city in La Rioja called El Ciego. The experience of visiting this winery is unforgettable. The fact is that other winemakers (with a lot of money) followed in their footsteps.

Having such a stunning building means you’re making better wines? No. It means you have the money to do it.

And that you understand that a picture is worth a lot more than a thousand words in the age of the image and the Internet.

It means that you will probably be concerned about making high-quality wines that are playing the same game as the facility.

If you visit Peñafiel, I’m sure you’ll visit Peñafiel Castle. The castle is in a privileged place. Wherever you look, you’ll think you have one of the most beautiful views of the Ribera del Duero in front of you. When you look down on one side, you will see the impressive ceiling of the Protos winery designed by Mr. Richar Rogers, Alonso Balaguer.

The view is impressive, but I would say that visiting the underground caves of the winery and how they have combined the old part of the winery with the most modern part is also something you should do. I would say that they tried and succeeded in doing what Marqués de Riscal had already done, that they made a good pairing with the history of Bodegas Protos and its fantastic underground cellars and the new part that is a model of beauty, functionality and efficiency.

So if you visit Peñafiel, do not miss it.

How important is architecture in making a brand of winery strong?

How important is architecture in making a brand of winery strong?

Spanish wineries to visit for their design