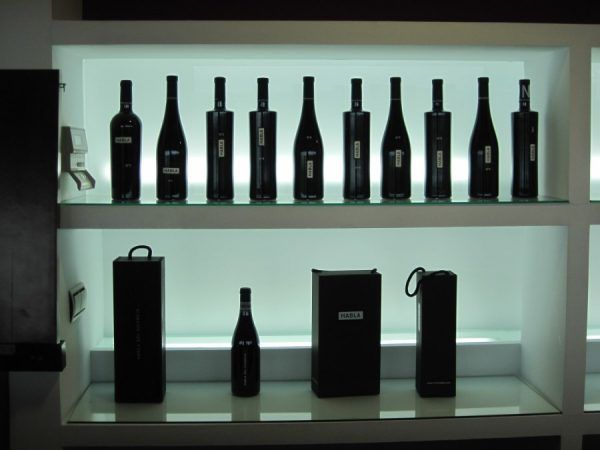 When thinking about Extremadura, I often find myself thinking of rural Spain – the remnants of a once prosperous region, impeccably preserved ancient Roman and medieval cities. Quaint people who are known for their charming extremeño dialect.

So, needless to say, I was caught completely off-guard to find that the village of Trujillo, home to a mere 9,000 in the province of Cáceres, hosts, perhaps, the most cutting-edge luxury winery in Spain – Bodegas Habla.

This was my first, of hopefully many, trips with Wine Bus and its creator, Ignacio.

Wine Bus’s business is exactly as it sounds – a well-crafted tourism company dedicated to taking Spaniards and foreigners alike, by bus, to many of the overlooked or hidden vineyards and wineries in the areas surrounding Madrid’s metropolitan city.

Ignacio’s goal is to provide an extraordinary experience exploring these lesser-known villages by pairing a unique wine tour with a historical guide through the city, without his guests having to worry about traveling home after a few (or more) glasses of locally handmade wine.

And let me tell you, he did just that in our trip to Trujillo.

I’m not much of a solo traveler, and I can’t say I have ever decided to join an out-of-town excursion without knowing anybody else in the group, but my fears were immediately erased as I jumped onto the bus.

Ignacio made all of us feel as if we had known each other for a lifetime, and that instead of being on a bus full of strangers, we were on a bus full of family. As the bus made its way down the rainy highway, we chatted and laughed – all excited about the wine we were about to taste.

After a quick two and a half-hour ride and a little off-roading past a herd of pretty confused sheep, we arrived at Bodegas Habla. Even from the outside, I knew that this winery was going to be a completely different experience from other wineries that I’ve visited in the past.

As we entered, we were kindly greeted by the Bodegas Habla team and were ushered towards the first stop of the tour – the viewing room.

As we looked out over the expansive vineyard, still bare from the winter months, we were informed by Victoria, the guide, that their interests grow beyond wine, and were the proud owners of prize-winning limousin cattle (which were grazing a few meters away) and also cultivated a small orchard of olive trees.

Victoria talked us through their one of a kind marketing campaign, which includes the distribution of high-quality photo books, each mirroring the different infusions in each addition of their wine, and modernized bottling designs.

Even more interesting, each vintage is referred to by a number, instead of a year and variety; this explaining that each year is different, and never the same.

This young winery, producing its first vintages in 2005, has overcome many obstacles to produce their luxury wines – one of these obstacles being the extreme microclimate of Trujillo.

The town sits generally on top of a rock, which causes heat to be absorbed and dissipated rapidly, causing the R&D team to constantly look for new methods of maintaining the temperatures necessary for fermenting and storage day-to-day, and season by season.

The rainfall throughout the year also varies drastically and even varies dramatically from year to year, but I was beyond impressed to see how this bodega was able to use these inevitable difficulties to their advantage by creating a one of a kind wine each year, never to be replicated again, causing each vintage to be limited edition and causing demand to soar.

The premises itself were massive, with the capacity to still grow, create, and store expansively in the future. They have invested in top of the line, cutting-edge equipment and have spared no expense in hiring its team of industry experts, including their brand-managing mastermind.

To explain the amount of dedication they have to their craft, let me ask you this: Have you ever wanted to enjoy a good bottle of wine without having to suffer the infamous wine hangover?

They’ve even figured out how to solve this pesky problem within their R&D team – all of it having to do with the different temperatures during creation and storing. In little under a decade, this winery has made an international name of itself, with buyers and distributors coming in from all over the world.

Something I was not expecting to learn about Bodegas Habla was that they are even capable of meeting kosher standards – all you have to do is ask.

Now to the most interesting portion of the tour: the wine tasting! Victoria had just spent the better part of an hour building up our hype and expectations about these luxury wines.

I was curious to see if I would be able to taste the efforts and expertise in the wine itself, and I was not left disappointed. We started off with the Habla del Silencio, the line of wines beneath those of the “alta gama” (highest quality), slowly inspecting its color, its density, its fragrance, and finally, its taste.

We worked our way through the next two glasses, the nº 12 and nº 9, in the same way, slowly experiencing and enjoying each different aspect of the wines.

Victoria emphasized the importance of following this procedure and tasting each in this particular order so we could experience the subtle change in fragrance and taste the second round through. And I could not believe it!

As we returned to the Habla del Silencio, the wine had taken on a sweeter, caramel fragrance and taste, which was something that was not present in the first sip.

We worked our way through the remaining two again, each taking on a completely different aspect than originally – something I had never experienced in a wine tasting before. I was able to see, first-hand, how each careful decision they made has created a wine worthy of its price and luxurious status.

I have never seen such dedication to the craft of winemaking, especially in such a modernized approach, making this tour an absolutely memorable experience. And all too soon, it was time to leave.

We rounded up the troops, each of us leaving with a bottle (or three), and happily hopped back on the bus for the next order of business: lunch. And let me tell you, extremeños know a thing or two about food.

Why visit Bodegas Habla and Trujillo at the same time?