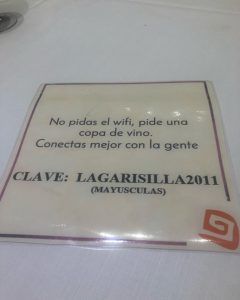 Where I come from

My experience with wine does not begin in my youth. It is a hobby that I acquired much later.

Some years ago I was a partner of a very, very interactive advertising agency before the internet was important in this world. That agency was tremendously original in its proposals. From there we proposed  promotional and communication actions to our clients in which the consumer had a very partipating role. We were tremendously creative and brought game mechanics to everything we proposed. nad the consumer had fun with us.

We were very successful with top-level advertisers as clients in Spain. It was really fun working in that agency. As a result of that success we grew and grew but there was a time in which I went to a different agency that was doing a pretty good work with new technologies. Actually there was not much market yet but they had been writing in a blog what was happening and could happen in the future in that sector. I noticed the immense field that opened despite my poor knowledge of it.

Looking for clients for my new agency I visited a couple of wineries and I was amazed by what I saw. The new technologies allowed wineries to establish a direct relationship with the final customer for the first time.

I proposed to the wineries that they should make a bigger bet on their digital communication but they were not prepared for that.

I fell in love with the world of wine.

I realized the immense potential in that sector and decided that I wanted to help the sector to change and take advantage of the new tools taht were appearing. I wrote and wrote, and I realized how much I learned by teaching others the game they could get out of new technologies.

I started organizing tastings for the uninitiated in the world of wine. at very competitive prices. These tastings were a total success. In one of those tastings I brought a couple of winemakers. Attendees were excited about the experience. And I decided that the experience could be even better if I took the attendees to visit the wineries. Then I discovered that my visitors enjoyed the visits to the wineries as much as I did. I had to continue doing so. And after many avatars I began to understand this business.

In my case, social networks and new technologies have allowed me to get in touch with like-minded people like the winelovers of which I am a part. And they have allowed me to go to meetings in which there was no one whom I had previously known and who have become my friends after 5 minutes of being with them.
The appeal of the world is in the real world. The world of wine is a wonderful activity to interact with others, with people you don’t know before and are attracted to other people simply because they have the same affinities as you. Those people who can live in places tremendously far from yours, you can maintain the relationship with them simply because having put face and eyes simply by being in contact with them changes your relationship with them.

For me it is a real pleasure to meet people who come from all over the world, who have known them because they knew we were doing wine tours and had decided to come to Madrid. We have shared 10 hours together visiting wineries and monuments, drinking very good wines and enjoying a very good meal.
I have told you about my country and its history, and many times about my personal life, and they have done the same.

And I was a person who traveled a lot around the world, instead of traveling I receive people from all over the world. People who have in common with me their love for wine, people who have discovered that a very attractive way to visit new countries is to be interested in their wine culture especially if it is in our case a country that produces such good wines as Spain.

Wine is social. Of course it is. And communications through new technologies and social media are social too. But if an Iphone in your hand, in the middle of a meal prevents you from talking to the one who is in front of you, throw it away and focus on that person. Because the real pleasure is in enjoying things and people in the real world.

And if it is the new technologies and social networks that allow you to find your soulmates in the whole world to interact with them in a real way and maintain the relationship in a virtual way you have caught the match of the combination. That way, of course that wine is social and social networks are social too.

Come with us and check it out.

Neil Armstrong was in Ribera del Duero 50 years ago

Bird watching with a glass of wine in hand

Folding candles in the mills of our country

Previous postWatching birds with a glass of wine in our hand.
Next postBodegas Chinchon. An amazing town 25 miles from Madrid.