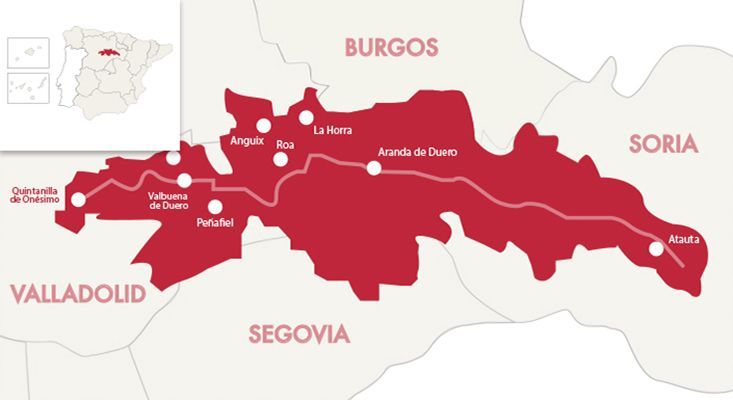 Not all wines are the same in Ribera del Duero. Ribera de Duero best wines.

It’s amazing how the name of the game have changed in the sale of wine in Ribera del Duero.

But exports changed everything. I could imagine how exports started. Possibly a Spanish immigrant approached a bar in New York and asked for a glass of wine. They put him a cup and told him ‘15 euros ’…”15 euros for a glass of wine? I can find in Spain much better and certainly much cheaper wines.” Surely that’s how it all began. Bicultural immigrants of Spanish, Italian and French origin who saw the opportunity to bring quality wines to the United States at a much more competitive price than Californian wines.

Those first importers needed arguments to sell their wines. Many international wine competitions proliferated at that time. Robert Parker also appeared and the scoring from 0 to 100 was invented based on his valorisation of the wines he tasted.

The first reaction in Ribera del Duero was the creation of cooperatives with which to face the purchase of machinery and tools to improve the quality of the wines. The objective of improving the quality was achieved but the commercialization did not work, so this initiative ended in failure.

The appellation of Ribera del Duero is created in 1982

20 years later 5 wineries and some cooperative decided to follow the path that Rioja region had previously done. The creation of the appellation of origin of Ribera del Duero in 1982. That did work, especially when Parker himself began to value the wines of the area very well and the wines of the region began to stand out in international competitions.

In the first stage for each of the wineries of this denomination, to say that one was from Ribera del Duero was the best selling point for the increase in prestige that the brand acquired worldwide.

The world of wine changes because of the boom in Internet and Wine tourism.

But the world has changed with the Internet. Now any winery has its own website. One can be in contact with a good number of their end consumers. There is also a revolution in the distribution of wine internationally. The wineries can sell directly to their customers even if they are 5000 km away. A winery does not need to have the best wines in the world for everyone, something that seemed impossible. Now one needs to be valued sufficiently by a few.

Following Parker’s style of making wines was a temptation.

Before, many winemakers were tempted to satisfy what they thought was Robert Parker’s style. There was a general feeling of the wines with a very protagonist wood could be better valued. Now, more than ever, winemakers are more likely to make the wines that come from their hearts. And they tell it on their own website, and in the visits to their wineries and in their communications to imply that your wines, your winery and your philosophy is unique. Now with the Internet, it becomes even more important to look different from your competition. The best way to look different is to really be different.

Welcome to the world of diversity. There are many wineries near Madrid. Why don’t you come with us to visit them? Have a look at our Madrid wine tours

The world of visiting wineries is as broad as visiting the universe.

Previous postControlling fermentation with water from a well.
Next postCastles and wines