Dulcinea del Toboso looks at Don Quixote in front of a windmill.

Dulcinea del Toboso looks at Don Quixote in front of a windmill. 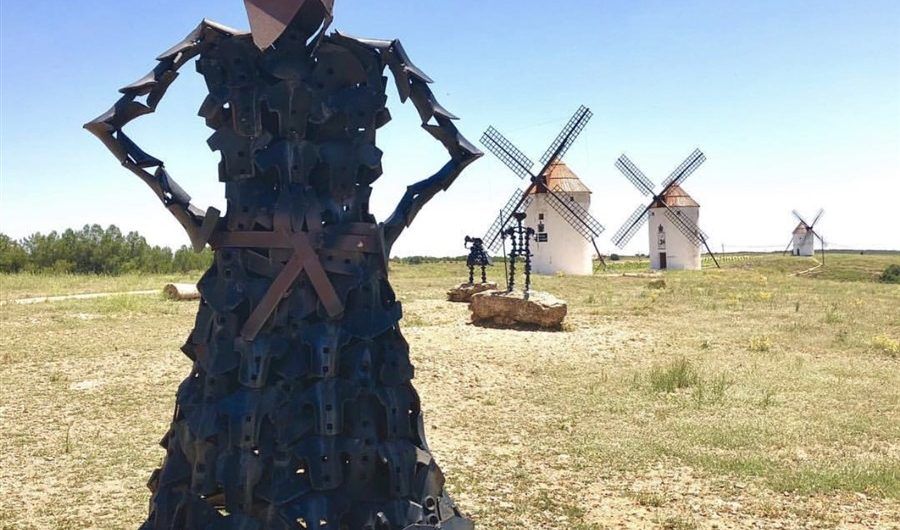 Statue of Dulcinea del Toboso looking at Don Quixote and Sancho Panza in front of a Windmill of la Mota del Cuervo.

We know that Don Quixote was in love with Dulcinea. But … What did Dulcinea feel for Don Quixote? Look at this picture and imagine what goes through Dulcinea’s head when she looks at the famous Knight of La Mancha. And meanwhile … What is Sancho Panza doing? It’s not possible…!!! He’s drinking wine in a boot !!! Sancho Panza was a wine lover of the 16th century! Health Sancho Panza!

I have a very special relationship with La Mancha. La Mancha is known worldwide for the Quixote, the most read book in history in the Spanish language. Written by Don Miguel de Cervantes in the sixteenth century.

Something that catches your attention when you visit different villages in the community are the stories that local guides tell us about the relationship that each village had with Don Quixote and his famous author.

For example, if you visit La Mota del Cuervo, they tell you that when Cervantes says: ‘Somewhere in la Mancha, in a place whose name I do not care to remember’. Some guides say that Cervantes refers to La Mota del Cuervo because it seems that in that town he was not very well treated and that is why he does not want to remember his name.

In this section, an authentic debate was created about which city Cervantes spoke about in his book

A good number of towns in La Mancha appear in Don Quixote’s book.

The last thing I have heard on the subject has been in El Toboso. In this town, there is a very interesting winery. This winery that goes against current in reference to other wineries in the area in their philosophy tell us that they do not care where Don Quijote rammed the windmills. That it could be in the windmills of Campo de Criptana or those of Consuegra, but there is one thing that is certain, and that is that Dulcinea was Dulcinea del Toboso. That is, she lived in El Toboso. And for this reason they called their winery Bodegas Campos de Dulcinea.. (Lands of Dulcinea)

This winery among other things is preparing a delicious wine called “Vale”. The wine is not only fantastic but has a history behind it endearing.

The winemaker explains that the name of the wine comes precisely from Don Quixote’s book, which seems to be, instead of ending the word “end” ends with the word “Vale”

Vale means ok or it is enough. The book of Don Quixote I am sure that it was a great effort for its author, it is so long that maybe Cervantes was exhausted when he finished it and said … “Okay, it’s over. I would say that “Vale” is the most permissive word in Spanish language. It is much more than ok in English. That you only have to propose any plan to do, that I am in my best attitude to say yes. That we do it

Cervantes is in every corner of La Mancha.

To make a good wine it is essential to have previously done a good job in the vineyard and in the winery. In 2019, much more must be done. With all the communication that can be generated on the internet if you have a nice speech you can make many people love your wines all over the world.

What to do in El Toboso, the town where Dulcinea was born?

In case you happen to visit El Toboso you know that there are several things to visit in this town. For example the Museum of Doña Dulcinea. It is a very attractive 16th century house where they teach you in a very didactic way how the well-off people of the XVI century lived.

You can also visit the Cervantino Museum where you can see Don Quixote’s book in more than 100 different languages. Some foreign visitors are so touched with the visit that if they have the opportunity to find copies of Quixote in other languages ​​they have the detail of sending it to this museum to be displayed. They have the Qiuijote for example in Esperanto. They also have the largest book in the world of El Quijote. This record is collected in the Guinness Word records.

In the Plaza del Rey Juan Carlos in the town there is a beautiful sculpture in which Don Quixote can be seen kneeling before his beloved Dulcinea.

In a nutshell. If you are a lover of Don Quixote and that was the reason why you went to La Mancha you should visit this amazing, tender and beautiful town of El Toboso.

Sunset in the windmills of La Mancha

I am in love with the windmills of La Mancha.

Sancho Panza is drinking wine in front of the windmills of La Mancha.

Watching birds with a glass of wine in our hand.