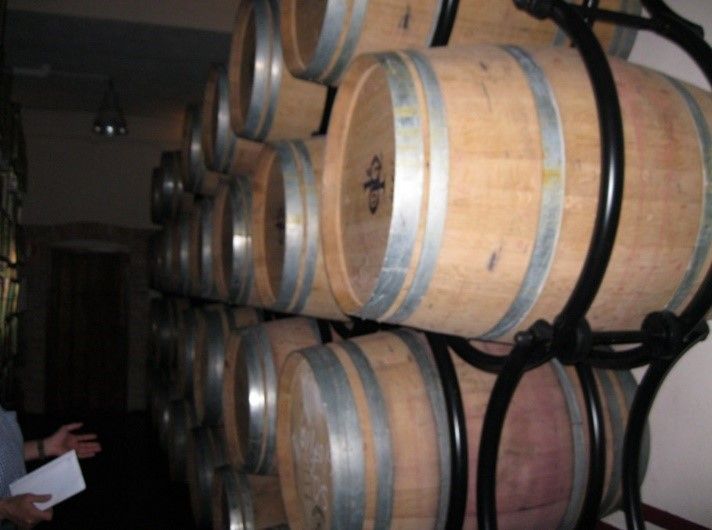 Bodegas Gosalbez Ortí is one of the wineries near Madrid we visit.

Yet another surprise! This time my friend Fabio Bartolomei from Vinos Ambiz recommended that I visit  Gosálvez Ortí Winery, which is near Madrid and makes organic wine. Fabio was sure that I’d like it.

I arrive at Pozuelo del Rey, I stop right in the center of the village and look around for the winery; a good omen – it’s right in front of me!

I go in and meet Carlos, the owner, who greets me heartily. His wife Estrella appears too.

Carlos and Estrella are an extremely interesting couple, for reasons that I’ll explain below. 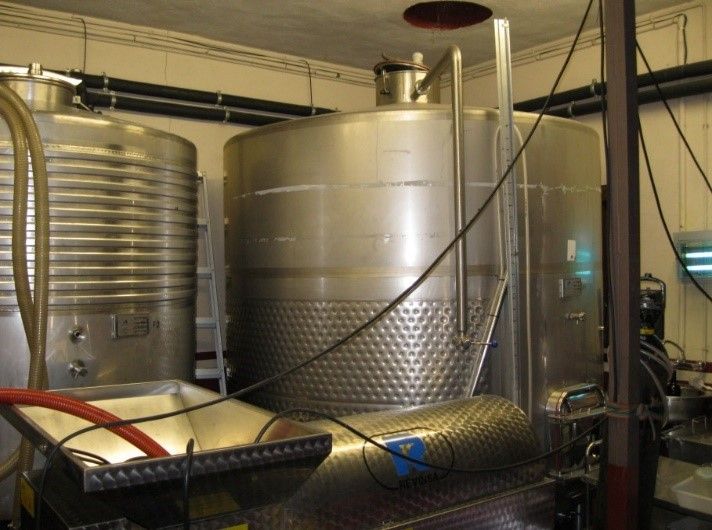 Carlos shows me around the winery, which is in a rather small building where the use of the space has been optimized totally.

I get the impression that he’s very methodical, disciplined, and a perfectionist. As he talks I can perceive the great passion he has for his work, and in doing things strictly in accordance with his principles and beliefs. He is also very good at explaining his ideas. Carlos decided to drastically change his lifestyle when he was 50. He wanted to run a winery. He was lucky to have a wife who supported him and even though she didn’t know much about wine, she took care of other important aspects of the business. They didn’t draw up a business plan; they just wanted to run a winery. Carlos then did a Masters in Oenology. At that age, when you do something, you do it properly. And what Carlos did during the course, apart from learning a lot about viticulture and wine, was to make a lot of friends and contacts in the wine world. The next step was to make some wine in a friend’s winery, and it turned out very well.

They then went to Tuscany to get to know the small local wineries, and they were over the moon! They could see first hand what they hoped their future winery would be like. They came back to Spain more eager to start than ever.

There’s a passage in «The Alchemist» by Coelho that says: «When you want something, the whole universe conspires so you can get it«. When Carlos talks, there’s a sparkle in his eyes that says just that.

They started with nothing in 1993. It took them a long time to find a place for the winery. Eventually, they found a building of 120 m2 and they calculated that all the equipment could fit. And there was a second building close to the winery where they made a wine emporium.

Walking through the winery with Carlos I can see that the installations fit in perfectly with the story he’s telling me. His ecological philosophy is present in every word. This implies a very restrictive use of products to protect the vines. 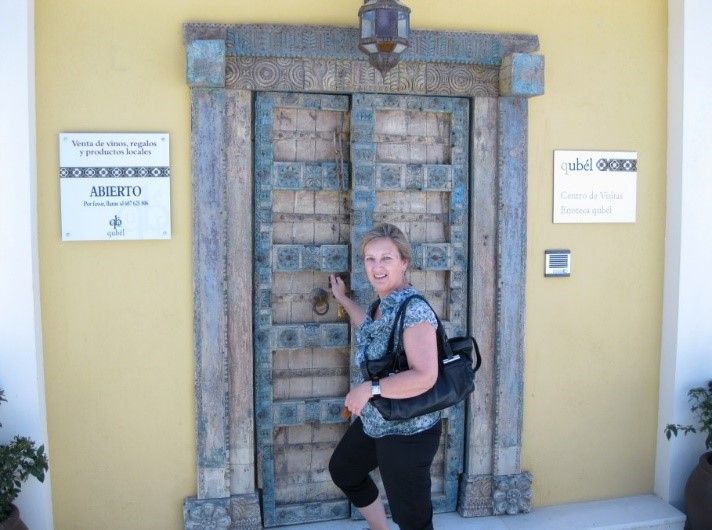 Carlos says that given Madrid’s climate it would be a crime not to grow grapes organically. Back then people told him that he would soon change his mind, but he hasn’t. Working organically means that you have fewer resources to work with to control the grape-growing and wine-making processes. It means that you are more at the mercy of nature and that you have to work very carefully with the resources you have available to you. It also means that the characteristics of the wine will vary depending on the climate in a given year. As Carlos says, «You have to let nature express herself». More important than what he says is how he says it. In 1992 he was 50 years old and he says that now he’s an old man, but standing in front of me I only see a man in the prime of life working (and succeeding) on his life project.

I fire questions at him and he replies to all of them though sometimes he refers me to Estrella. I start to realize at that moment what a great team they make. Carlos says, «This project would never have worked without Estrella». He said it with great satisfaction, and later I would find out that it is absolutely true. Him, with great passion and strength, she, supporting him with her feet firmly planted in the ground.

Next, I talk to Estrella. She is the same but different. Different but the same.

Carlos is the mind, perfection, detail, passion. Estrella is the ideal companion who not only follows her husband’s dream but who realizes that if she doesn’t pull her weight and concentrate on the areas that Carlos doesn’t understand, then the project will fail. They invested everything they had and more in their project. So she learned about wine when before she wasn’t too interested. And she does the administration and marketing and sales of the wine they make.

In my opinion, they are an extraordinary team. 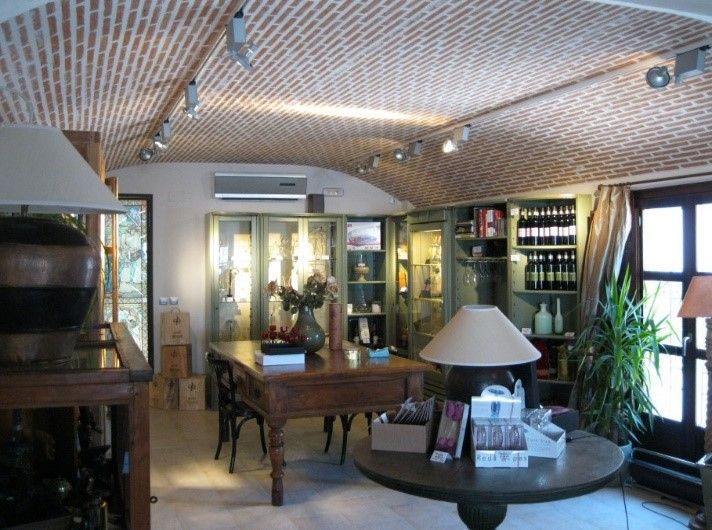 At the wine tasting room

Estrella then takes me to their wine emporium, which is just 100 yds from the winery. From the outside, the building is quite normal, but as you step through the door, you can tell that you’re going to see something special. And it is. There are three floors, all decorated exquisitely.

Natasha, an American woman with a good background in wine, is also part of the team; she helps them with tastings and sales. I didn’t get to meet her this time but hope to do so in the future.

First I tasted a lovely white wine. I looked for it on their webpage but couldn’t see it. Then I taste a «Mayrit» (which is ‘Madrid’ in old Spanish). Tempranillo, Shiraz, 5 months in oak. This wine was chosen by the national Japanese Airline as their recommended wine in first class. 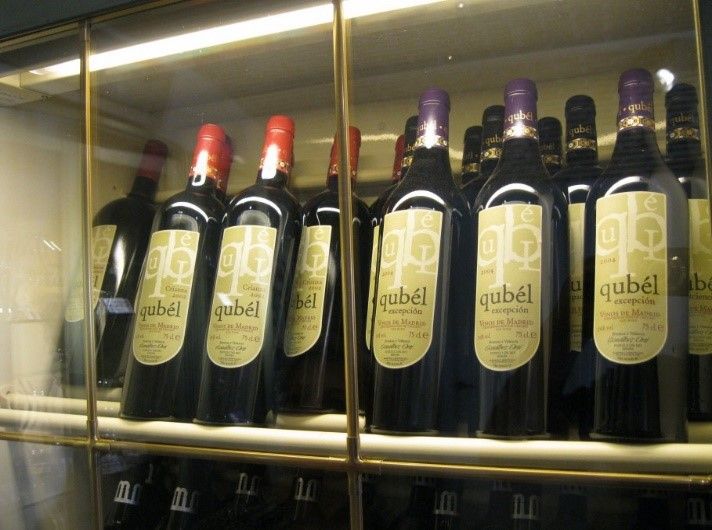 Next, a Qubél Nature, a crianza, and the story of how they made this wine could be covered in several posts! 11 months in oak, 2002. Even though Qubél is an organic wine, they don’t promote it as such. They prefer to focus on the quality, and then in addition mention that it’s also organic. Does estrella know about wine? Lots. And about marketing? Even more!

Lastly, I try a young wine, that Carlos mentioned earlier. This is a new line of wines, as the winery is adapting to the era of recession that we are currently living through. So they have made a cheaper wine without diminishing the quality. They only made a small quantity this year, but in view of the demand they had for it, they will almost certainly make more next year. I figured that they are very pleased with this wine, as they insisted that I taste it last. And they are right to be pleased with it. Even if it has not been in contact with oak, it’s a perfectly acceptable young wine. If this year has been a success for them, next year will be even more successful.

They tell me that the Hotel Ritz in Madrid includes a visit to their winery as part of their recommended tours: Hotel Ritz Gourmet & Wine Tour

I’m sure that hotel Ritz and JAL enjoyed a similar experience in their winery as I just did.

I feel that in this post I’ve expressed less than I actually perceived. I suppose that’s inevitable. I’d just like to say that my visit to that winery was an extraordinary experience, and I recommend everyone to go too. Word-of-mouth works wonders and I can understand why the clients of Gosálvez Ortí Winery chose them as suppliers. I believe that once a client has been hooked, he hooked for life – by the quality of the wine, the service, the people, and the underlying philosophy.

You can see much more information on their webpage: http://www.qubel.com/.

Hope to see you again soon, Carlos and Estrella. I had a great time with you.

Previous postRibera del Duero wineries. What they have in common and how they differ.
Next postCollaborating is the true magic potion. Coworking