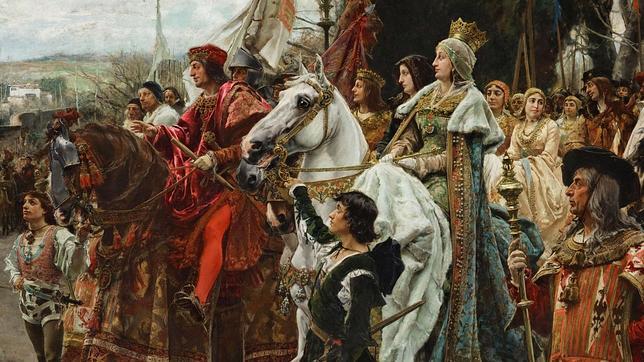 Isabel de Castilla and Fernando. First kings of Spain in the 15th century. She and he both rule. (Tanto monta, monta tanto Isabel como Fernando)

The stage of Isabel de Castilla and Fernando de Aragón is a fascinating stage. It is the accelerated passage from the Middle Ages to the Modern Age. A character like Isabel la Católica appears with an immense power that draws attention.

A series of coincidences were conjugated, making Fernando and Isabel one of the most important couples in universal history.

At Winebus we tell those stories on our daily wine tours from Madrid. If you are interested in our offer click here. Availability calendar

A queen in the XV century. The first case in European history

At the end of the 15th century, it was not conceived in any country in Europe ruled by a queen. Isabel de Castilla was the first case. In the Middle Ages, you could be a King, but you also had to be a remarkable warrior to earn the respect of your warriors.

With those spears and those swords so heavy, it was complicated that there was room for a woman to rule. Probably another woman as influential as Isabel de Castilla would have to go back to Cleopatra, but Egypt was not the hegemonic power of the moment as Spain was in the fifteenth century.

Elizabeth’s influence was such that the rules of modern chess were changed by her. Since then one loses a game of chess when they eat your king, but the most dominant piece on the board is the queen. Curious truth? This is due to the figure of Isabel de Castilla.

Isabel and Enrique IV of Castilla

The human being in the Middle Ages was nothing fancy. In the case of poor people, he only had in his head how to survive the next day. In the case of a noble, he would only think in hunting or being at war with his neighbors. The world, not only in Spain was also very beast, absolutely macho.

Isabel was a woman of great character and coincided in Castile with her brother, Enrique IV, of weak character and who was also said to be impotent.

The chances of Elizabeth reigning were not too high. The king’s wife had a daughter, Juana, whom you named Juana la Beltraneja because it was said that the father was Beltrán de la Cueva. In other words, she was not really the king’s daughter.

In Castilla, a good number of nobles did not want Isabel to marry Fernando de Aragón. They wanted to marry her to some other king, among them the king of Portugal.

This would have forced her to live with her husband wherever he was king. To Portugal? Fantastic. Still further? Better than better.

Isabel de Castilla and Fernando de Aragón needed each other.

Fernando was the son and grandson of Castilians and that did not make any grace to the Castilian nobles.

The interesting thing was to see that Isabel needed Fernando politically as much as Fernando needed Isabel. Maybe that’s where the success in your relationship comes from.

Reading Machiavelli in “The Prince” is tremendously interesting. Machiavelli talks about Fernando while he is still alive. That is another interesting detail. He comes to say that it is very important to be a very good warrior so that your soldiers respect you.

Isabel plays her cards incredibly well in a man’s world. She disobeyed the king and went to war against him and took from him the pact of the Toros de Guisando by which Enrique IV granted Isabel the right to be the queen of Castile at her death.

Isabel marries Fernando and when Henry IV dies she proclaims herself Queen of Castile being her husband the Prince of Aragon fighting in Naples. Fernando is very disappointed with that news and comes in a hurry to see what is happening.

Fernando was not an easy guy. But still, he accepts that the Queen of Castile would be his wife. And he defends the reign of his wife with arms before Juana. And they together win.

They make up the mount, ¨tanto monta, monta tanto” (She and he both rule) And it looks it works.

They go to Granada and in 10 years they conquer the remaining last vestige of Arabs in Spain.

They meet Christopher Columbus and this means the perfect situation because Fernando finds what he wanted was to have enough money to have a professional army to do what he knew best to do, which was to make war: constantly.

Fernando governs alone, after the death of Isabel de Castilla.

Isabel de Castilla dies at 54 and that allows Fernando perhaps to do what he had not been able to do before, which was to exercise as a king.

In theory, the queen was Juana, her daughter who had been married to a Habsburg, Philip the Fair, heir to the German Empire, but he dies young, perhaps poisoned by his father-in-law. (Felipe el Hermoso must have been a very special man also ).

All this allowed Fernando to reign alone until, seeing that he was going to die, he summons his grandson Carlos who was being educated in Flanders to inherit the Spanish empire that belonged to him by his mother as well as the German empire that corresponded to him from his father.

Emperor Carlos I of Spain and V of Germany.

During Carlos’s reign, Magellan appears to be another Christopher Columbus character (actually the Portuguese had the opportunity to discover both the case of Columbus and Magellan to discover America and to travel around the world to the west). The Portuguese had at the time, other interests involved in exploiting the route of the Indies and China, passing through the Cape of Good Hope in South Africa.

I recommend to everyone who reads this post that if you have the opportunity to visit the Alcázar de Segovia, do so because all this history is understood, and much more enjoyable seeing what is in this enclosure.

What do we like best? Wine or history? We like wine with history and stories with wine.

Those are the stories we tell on our way to the wineries. Do you want to come with us from Madrid?. Have a look at our Madrid wine tours