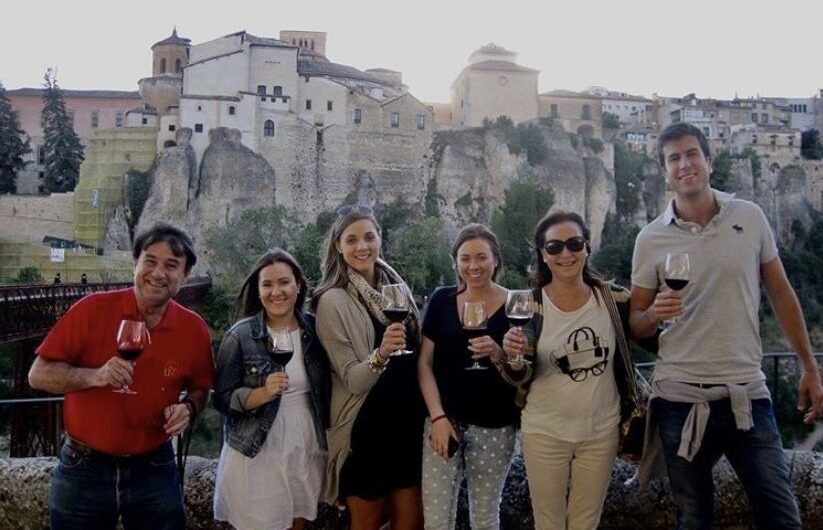 Cuenca at night, an unforgettable experience.

The city of Cuenca has been nominated as Unesco World Heritage Site.

This town was reconquered by Alfonso VIII from the Muslims in 1177.

It is the city that if you come to Spain you would not have visited in the past, because Toledo, Segovia, Avila, in central Spain were much better communicated.

Segovia and Toledo are from Madrid in 25 minutes with the fast speed train, 1 hour by car

In the past, Cuenca took at least an hour and a half by car. Its winding road and its location of the town made it necessary to go expressly. Now things have changed because the AVE (fast speed train), with its route to Valencia, makes a stop in Cuenca. It takes you now just 1 hour from Madrid by train.

My personal experience with Cuenca

I have a special relationship with Cuenca.

When I visited it for the first time when I was 16 years old. It was on a school field trip. We had spent the previous day in Barcelona, having fun at night in that city. Imagine, among 100 other kids on a field trip how little we had slept.

When we took the bus the next day I was really a mess, very sleepy and with very little desire to see monuments.

The Science Museum of Cuenca.

So, I did not see anything about Cuenca. I had an unfair conclusion that in Cuenca there was nothing to be seen.

Years passed and much later the opportunity arose to visit it again. Given past experience, I had no high expectations.

Cuenca is wonderful, especially at dusk

I arrived in the city just before dark and stayed at the Parador Nacional (Parador de Cuenca), which is the most beautiful hotel by far in the whole city.

If you visit the town at night, everything becomes magic, the lighting makes you think they have taken you to a fairy tale town. You would say you are in Hansel and Gretel’s story.

After what I have told you, what do I recommend? That you do the same as I did but that you get to the city with the high-speed train, to be in Cuenca in just 1 hour. Book a room at the Parador (you will be surprised about the competitive prices of this hotel) and that take a guided tour in which they will explain the history of the city.

What to see in Cuenca

“Casas Colgadas”. “Hanging Houses”; A tremendously attractive and original building with wooden balconies like you will not have seen in any other part of the world that overlooks the gorge that divides the city of Cuenca in two.

The Science Museum of Castile La Mancha, located in the old town. It has a Planetarium, a History of Astronomy with important figures in science, Treasures of the Earth (geological evolution of the cosmos and life), History of the Future, a person’s life journey until death, scientific advances on health and care of the environment

Spanish Abstract Art Museum of Cuenca. It is located in the Hanging Houses of Cuenca. Open since 1966. It has a collection of paintings and sculptures by artists born in Spain. This museum was a pioneering initiative in Spain on publicly displaying contemporary abstract art under modern museum conditions.

Plaza Mayor. The Plaza Mayor is the historic center of the old town. Due to: 1) The city´s location on the mountains, 2) It is surrounded by two gorges, and 3) The lack of room, the Plaza Mayor has an irregular shape, that is very different from most of the most important squares in Spain, which have a geometric and regular shape.

In the Plaza Mayor, there is also the Cathedral and the City Council.

It is one of the first Gothic Cathedrals in Spain. It influences the style of construction of the Cathedral of Toledo. It was built over an old mosque.

Cerro del Socorro. In this place, there is the monument of the Sacred Heart of Jesus (Sagrado Corazón de Jesús). This monument can be seen from very different points of the city. We recommend you to go up walking from the Parador Nacional.

It is a good slope of no more than 20 minutes. At its top one can see unforgettable views of Cuenca

Puente de San Pablo. This bridge dates from 1902. It is made of iron and wood, 100 meters long. It leans on the piers of the previous bridge, built in the 16th century. That old stone bridge sank as a result of the passage of time and inexperience in the attempt to blow up a ruinous arch.

Parador Nacional de Cuenca was formerly the Convent of San Pablo, of the Dominican order. It was built in 1523. It is in the Gothic style. It became a National Parador in 1993.

It is highly recommended to stay at any National Parador in Spain. This one in particular has a special charm because the decoration and its structure transports you to the 15th century. It is decorated with exquisite taste. You are only 5 minutes from the city center. To get to the center you have just to cross the San Pablo bridge.

The view from the Parador and from the bridge will take your breath away. Just as you pass the bridge, you come across the Casas Colgadas (Hanging Houses)

“The Ciudad Encantada“, “The Enchanted City” is a natural setting that is 40 minutes by car from Cuenca.. It is a Spanish natural setting of rock formations formed thousands of years ago.

It takes 1 hour to do it and can be done without a guide since you have to follow a signposted path where you can see many different formations. It is advisable to do a guided tour that allows you to understand much better the characteristics of the place.

Cuenca and Ronda are twin cities in Spain

This city is unique in the world because it is in the middle of a gorge that divides the city in two. Awesome.

I can think of only one other city in Spain with similar characteristics, Ronda in the province of Malaga.

As I was in Cuenca I thought it was the most beautiful city I had ever seen. But maybe this is a comment I said before when visiting other towns. I am a lucky man because I had felt several times I was in the best place at the right time.

Anyway. Don’t forget to visit Cuenca. The visit can be an unforgettable experience.