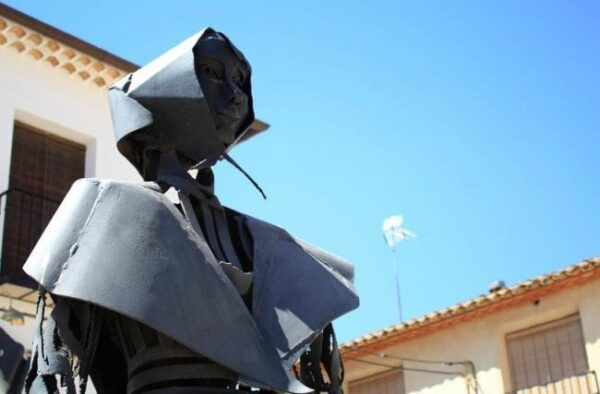 The most romantic Spanish love story. The story was written by Cervantes in Don Quixote.

At least it is the most famous, since the book of Don Quixote is the book in Spanish most translated into more languages ​​in history.

Many people will be able to tell me that the history of Calixto and Melibea or that of don Juan Tenorio are even more beautiful and famous.

I don’t want to get into that debate. Or maybe yes.

How does Spain recognize Cervantes for his work?

I am a lucky man. I was able to travel as a young man and tour all of Europe, having jumped to the United States, Mexico, Barbados, and Brazil, and having been to Morocco, Egypt, Turkey, and the Polynesian islands. I was able to see wonderful things around the world on those trips.

Then chance pushed me to get to know the world of wine and wine tourism in my own country.

It was because I had a girlfriend from Seville. I fell in love with her, Seville, and the south. It was an incredible experience. Almost as if he had been born again.

At that time not only was I going south but my girlfriend was also coming to Madrid. I felt compelled to do what she had done when I visited the south. I felt made to show him Madrid and the surroundings.

The attractiveness of Spain through its wineries.

And the cellars appeared. Those in the north of Madrid (Ribera del Duero, Rioja, Rueda, Toro, Cigales).

For an average Madrilenian, if he is not very involved in the world of wine, he cares little about what is near Madrid in the north or what is in the south. The average Madrilenian has in his head to reach the coast since there is no beach in Madrid or to take a trip to a distant country.

This man from Madrid leaves what is around Madrid for small weekend getaways. Adopt an attitude of how you already have much seen what is very close.

Do we Spaniards value our own enough?

I suppose that is a defect that we all have, whether we are Spanish or Swedish, American or Japanese. We all have in mind that you have to do more than 5000 km to see something worthwhile.

In my particular case, I had the obligation at school to read Don Quixote at an age (11 or 12 years) in which one does not understand a word and is extremely bored.

It also happens that we associate Don Quixote with movies from the 50s or 60s that are very outdated.

Foreigners teach us that we have an incredible country.

As I was saying, I am lucky to have visited La Mancha many times with foreigners. These foreigners eagerly seek to visit the mills of La Mancha. They go, they see them and they become engrossed.

We propose to make a much more complete trip. The mills are impressive, but if they only see this, the visitors may miss the great history they are looking for. The one to get more into the book of Don Quixote, the one to taste the wines of La Mancha.

The design of the Don Quixote de la Mancha tour that we propose emerges from the eyes of our visitors, who remind us that we have an unrepeatable country. They have taught us to respect Don Quixote and Dulcinea.

Can visiting the Don Quixote Mills be romantic?

This is a small example of what the foreigners who accompany us to visit La Mancha transmit to us.

On one occasion an American blogger came who had been a flight attendant and who had previously traveled the entire world from top to bottom.

This woman came with her boyfriend. She told me that it is this trip that they made to La Mancha they came directly from Venice, They had traveled its canals, climbed on a gondola with a gondolier singing at the top of her lungs a beautiful Italian song.

Her boyfriend all this scenario pushed her to kneel in front of her beloved and asked if she wanted to marry him. She replied yes.

When she tells me that story I tell her that this was a challenge for me. The challenge was to make that trip at least as romantic as the one in Venice that I had just been told.

I reflected this on my Instagram account (here is the link) And I say in the link that I did not dare to ask at the end of the trip if I had managed to make that trip as romantic as the one in Venice.

And I was lucky (that’s what social networks sometimes give you to receive the answer from this woman when she had already returned to Alaska, which is where she lived. She told me, of course, that she had succeeded.

For those who consider that La Mancha is not such a romantic place, know that at least in Alaska there is a woman who considers that her trip to La Mancha was at least as romantic as that of Venice.